Moving day is almost upon me once again. I think I have developed a fairly good system of packing over the years, but I think one area that I tend to leave as somewhat of an afterthought is transporting my figures. The good news about slipping in to the role of a collector (see previous post) is that at least the models are safely tucked away inside (sometimes almost indestructible) layers of packaging. That’s not the case with the various models that are in various stages of completion. And keep in mind that I use the term “completion” here only in the loosest sense: most of these models are simply based and primed, with perhaps a few having at least basecoats of paint (usually in just a single color). As everything else is now packed, and I gaze out at the remnants of various armies, I am resolving now to (at least in the future) consider more carefully the transport of various miniatures.

After all, I’ve seen the results of one move too many: my Chaos fleet (from Battlefleet Gothic) is in a deplorable state after the last three moves. The Imperial fleet never caused that many casualties! I’ve come across parts of a grand cruiser, parts of a battleship, and various escorts in the course of packing (at least the escorts are in fairly good shape). My Grey Knights seem particularly prone to shed their Nemesis force weapons, along with the arm that holds it. What to consider now? I’ve heard the guys on 40K Radio mention Battlefoam, and from the web site that seems like it would work (except perhaps for the Battlefleet Gothic ships). I’ve found a few others, but many seem to be overseas, and I was not looking necessarily to incur international shipping charges. Does anyone have any particular recommendations? Products or methods they have used for moving models?
at 10:39 AM No comments:

I never intended to collect miniatures. Indeed, the idea of a “collection” to me always seemed to revolve around the idea of something that you acquired, either for some aesthetic or varietal reasons, and that you retained because you held out the hope (however vain or naïve that might tend to be, as I was always one to be able to convince myself that somehow the “West Coast Avengers” might aspire to approach the value of, say, a really nifty collection of egg spoons) that, at some time in the future, the objects of your affection might be more valuable than what you had paid to acquire them (or perhaps more than the aforementioned nifty collection of egg spoons). I had not believed (nor am I yet convinced) that old miniatures might attain that status. Nevertheless, it does seem that over the past twenty-some odd years that I have acquired box after box of now “classic” figures.


It is really far more than I will ever be able to assemble and paint. I think perhaps the fact that I am actually a terrible painter may have contributed to this state. Even when I was younger and through some patience (hard to believe, I know) and perseverance I could produce a figure that was somewhat passable, I could never produce such in any appreciable quantity, nor with any sort of alacrity. Painting four or five figures at a time would usually begin to bore me, and when painting became too much like work I would tend to lose my motivation to paint rather easily. Thus I would pretty much always acquire figures at a greater rate than I would be able to assemble and paint them.


Nor were my acquisitions always that logical. Indeed, now when I come across that box of figures I sometime wonder “what was I thinking?” (this, in and of itself, tends to be a common thought of mine, such as when I find myself watching yet another terrible monster movie on the SciFi channel or the like). Sometimes it is pretty obvious – I’ve always had some affection for Eldar Aspect Warriors since they first were introduced, so the fact that I seem to have a fair amount of them isn’t terribly surprising. However, the reason why I acquired a blister box (for those of you who don’t remember that packaging, first start with an amount of clear plastic that could construct a Baneblade, then fill with a full squad of 10 or so figures, and then require a large chisel and an 8 pound sledge to open) full of Eldar Guardians who, through some mistake of packaging, all appear to be standard bearers, remains somewhat of a mystery. I never particularly liked Guardians and, if you’ll recall 2nd edition, I wasn’t really required to take them, as force organization slots had yet to be invented. I also seem to have acquired about one each of the old Chaos Space Marines – I’m not quite sure why. Nor do I know why I seem to have a bunch of the old metal Marauder Reiksguard Knights. I never did have an Empire army, and I can’t remember even aspiring to own an Empire army, so I’m not sure why I bought them.
I never thought of using some of these old miniatures as bits for conversions, either. Largely that is likely due to the fact that, being a terrible painter with a short attention span (q.v.), I was not terribly adventurous when it came to conversions either. Nor did it seem a good idea to break out a pneumatic drill (to open one of the blister boxes, of course!) just to get one backpack from those standard bearers, for example.


Through various moves, I’ve winnowed the herd, so to speak, with Zorcon bearing the brunt of my various efforts to divest myself of say, early Imperial Guard Rough Riders (I’ve no idea why I had them – they were the early kind with basically regular looking Imperial Guardsmen riding horses wearing cowboy hats with the brim pinned up on one side). But for each of those examples where I managed to dilute the collection somewhat, I still keep acquiring more miniatures, and I still have designs on making some progress at some point. I’m certain that my Necron, Tyranid, Grey Knight, Dark Elf, and Chaos Space Marine armies may yet see the light of day at some point. Oh, and I’ve got the makings of some Vampire Counts troops, too. As you can tell, a lot of thought went in to those armies – just don’t call it a collection. Hey, and would anyone like to buy some fine copies of the West Coast Avengers?

To Paint or not to Paint

Ron Saikowski at From the Warp recently asked me about where I get my motivation to paint and complete an army.

The biggest motivation for me right now is not wanting to field an unpainted army… even in a casual setting. I don’t need a game date to draw from either. Just the desire to complete the project is often enough to keep me going. Also, I always have multiple projects going at once, so I can easily shift gears to a new piece if I need to take a break from something that has become too boring or tedious.

When our group was larger and more active in the hobby, there was a casual competition between all of us to keep up with each other… both in completing the army/team/gang and improving our painting skills. Nothing is more motivating when you see your opponent placing his new nicely painted “toy solders” on the table across from you.

Unfortunately, I have yet to play in a tournament, but I imagine that having a date looming in the horizon, where many people will see my army, would be a tremendous source of motivation.

My buddy Laertes and I were discussing this very topic a few weeks back. We were both looking for some inspiration. Neither of us had played or painted in a very long time, and just the fact we were talking about new and existing projects gave us motivation to pick up a brush. His thoughts on the topic:

I think you have to be playing the army. The greatest motivation to paint is usually an upcoming event: a game, a tournament, something like that. Sure, you can be reading the latest Black Library novel, which tends to motivate you in general, but what I find you need the most is the deadline that itself forms around an upcoming game time. It is much different to think, conceptually, that a new conversion for your Dark Elf Dread Lord would be an interesting challenge, than to consider that you just need to get that unit of jet bikes painted and finished enough to be ready for that game on Saturday. Worse yet, what if you are faced with the dread aspect of having to use Ultramarine models as a proxy for Khorne Berserkers? That is motivation to paint right there!

If this can help one little plastic grey guy attain the ultimate goal of reaching his full technicolor potential, that my efforts are worth it! Cheers and happy painting!
at 2:23 PM No comments:

I'm gearing up for my first 5ed game. I have updated my 4ed Tau force with the following results. This is basically an "all-comers" list. I am currently not certain what I will face... it could be Demon Hunters, Eldar, or Necrons.

I played my first game of 40k today with my 6 year old son, Marcus today… well, at least it was a game played with 40K figures. Lets call it 40K (very) light.

Army Lists – Space Marines vs Orks
Rules of Play
Marcus had a terminator librarian as the commander, and he chose a tactical and an assault squad to bring. I took the Black Reach Assault ork boss, a unit of ork boyz, and a unit of gretchins.

Annihilation was the name of the game, and both sides ran straight at each other.I used a 3” token that we placed in front of the miniature to simplify measuring movement.

Our first game ended with a decisive victory for Marcus. He won with his commander taking only one wound plus 7 men left in the tac squad. Game time: 30 minutes, but what really counts is Marcus had a really good time!!
at 3:45 AM 5 comments:

Here are a few scratch-built Tau vehicle upgrades I made: A blacksun filter, a drone controller, and a disruption pod. 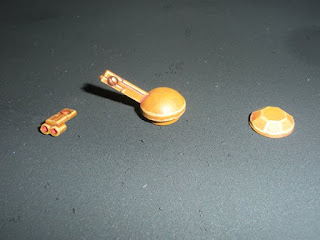 The blacksun filter is made from a pulse rifle and photon grenades. I admit this looks a little funny on a tank, but I think it is clear what the item is weather on a battle suit or a tank.

The drone controller is made from a pulse rifle and a wooden cap. In retrospect, it may be a little too big, but the one that comes with the stealth suits is way too delicate for a battle suit.

Here are a couple of pics with the upgrades mounted on a battle suit and a devilfish. 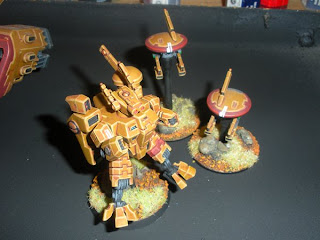 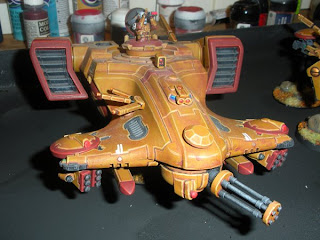 All in all I am pleased with how these turned out. I have made magnetized hardpoints all over the tank, to accommodate a fully equipped devilfish. You can see the attachment points for my still in progress flechette dischargers just above the seeker missiles.
at 2:24 AM 1 comment:

Well a while ago I started working on a unit of orc boar boyz. The "boars" are actually HeroClix Lockheed figures. However, WHFB has been off my radar for a very long time. Here is a shot of the Boss. 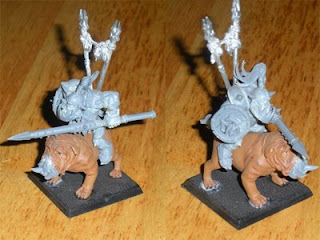 I am considering removing the arms and magnetizing them. In addition, making a magnetized 40K version and using the unit as a counts as warbiker squad.
at 2:01 AM No comments:

Well, after completing my son's first army, I have put his second army on the project shelf. This will be a basic ork horde. The first squad will be comprised entirely of 2ed Blood Bowl orcs with arm swaps. Here is the first one... 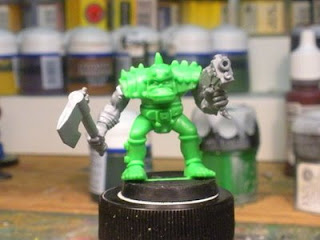